Complete the form below and one of our friendly staff members will contact you within a timely manner to setup a consultation. In this consultation we will discuss your legal matters, possible solutions and fee structure. We are here to help. Please contact us for more information. We look forward to speaking with you.

We wanted to take this opportunity to say a big thank you for all of your help with regard to my application for permanent residency in the USA. We both found that the whole process was stress free due to your excellent professional skills on this subject. You kept us fully informed of all the procedures and at no time did you give us any false hope. We also were very impressed with the legal costs for the process; you never once told us that an unexpected cost had arisen. What you told us was the total cost, was indeed the total cost. Once again, we thank you for an outstanding service and would definitely recommend you to all whom may require this service. God bless you.”

Gilda McDowell has proven to be among one of the best lawyers in her field. While the process is lengthy, she made it as smooth as possible. Her guidance is straight-forward and her dedication is endless. She showed continuous concern throughout the entire process. We were fortunate to receive a successful and life-changing outcome. If it were not for Gilda McDowell’s perseverance, dedication, and hard work, we would not have achieved this goal. It is with great admiration and appreciation that I recommend using her services.

Texas, and it is even more difficult to obtain a working visa for an athlete with extraordinary abilities. Thanks to your efforts and expertise, I was able to secure an O-1 visa for an athlete with extraordinary abilities to become my Brazilian Jiu-Jitsu Head Coach for United Martial Arts Center. I want to express my deepest gratitude for all you and your staff did to ensure the success of this case. I could not be more pleased with the results you produced. I recommend Gilda McDowell unequivocally and look forward to working with her again in the future.”

Come and see Gilda McDowell. She helped my husband fix his papers. She would always let us know what was our next step. Now my husband is back from Mexico with his approved green card. Thanks to her faith and hard work.

I was very pleased with Mrs. McDowell’s professional representation on my case. She gave me trustworthy and diligent legal services. Gilda is a great advocate for your immigration case. I would recommend her to anybody. Thank you.

Thank you for helping my husband and I navigate through our difficult situation. We are impressed with your dedication, compassion, and your legal services. After working and wasting our time and money with other attorneys, we are blessed to have found you. The minute we came to your office you made us feel welcomed and gave us clear strategy to help with my husband’s case. We are so glad we found the right attorney to take over my husband’s case. Thank you for all your help and encouragement during this process. My husband’s case got approved and now our nightmare is over.

I want to start off by expressing how thankful I am for all of Gilda’s help. Not only did she help me, but also my sister, Cristina. My family and I had been waiting forever to start the process of becoming legal in the United States. My situation may be temporary but as for now I am so grateful that Gilda was able to get me where I am today. All the relief I feel is thanks to Gilda. Gilda made sure to always let my sister and I know what to do and when it had to be done. Gilda is the only Attorney I have dealt with but it is enough to say how great she is at what she does. Gilda just doesn’t get her job done, she cares about her clients. Our happiness makes her happy and I believe that is extremely important. I recommend Gilda’s services to anyone; she is great at what she does. Once again Gilda, thank you for all that you have done.

I would like to thank you very much for your service. You and your staff exceeded my expectations. My case was complicated and I consulted several attorneys before I decided to hire you. I am so blessed to have found you. I can never thank you enough for all that you did. It was a great honor to have met you and to have you work on my case.

Martha B., Martha B.

Like you, I am also an immigrant to this country. I was born and raised in Chihuahua, Mexico and I came to the United States in the year 2001 after my marriage to an American citizen.  I attended law school in my country at the Universidad Regional del Norte in the state of Chihuahua.  However, as many of you know, you can be “somebody” in your home country, but when you come to America without speaking English you are nobody here.  I left behind my family, my country and everything I was familiar with to come to this country.  I did not want to give up on my dream of becoming an attorney and helping people. I worked extremely hard to learn enough English to be able to continue my education in the United States and 5 years after coming to this country, I graduated from the University of Northern Colorado with a Political Science major and a minor in Legal Studies.  In 2008, I graduated with a Doctor of Jurisprudence from Texas Tech University school of Law and I opened my law firm in 2009. 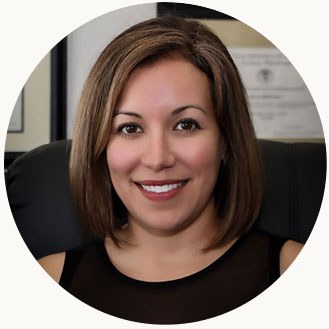 Why should you hire us?

You should hire us because we care about you and your success! Your experience will be completely different when you consult with an immigration attorney through an interpreter versus when you consult to an Immigration attorney who not only speaks your own language fluently, but also understands your culture.  All my employees are also immigrants and speak Spanish as their first language. Our mission is to help immigrant families work and live in the United States without fear. We have changed the lives of many of our clients. You can read their success stories on our testimonial section, google reviews, or our Facebook page. You could be our next success story.

Why should you act now?

As you already know immigration is one of the most talked about areas of the law on TV, news, and reports.  Immigration law and their interpretation is constantly changing.  However, the recent changes have not been favorable to the immigrant communities.  If there is even a small possibility that you may be able to fix your immigration status, you should pursue it. Call us to schedule an appointment for an immigration evaluation. Your peace of mind and your family’s future are worth it!

Why should I hire an attorney?

People underestimate the complexity of immigration cases and think that all that is required to do is fill out forms. However, the consequences of filling out the wrong forms or the correct forms incorrectly can be catastrophic to your case by having your case delayed, denied, or even placing you in removal proceedings. Your immigration case is not a situation where you should become wise at your own expense. Hire a competent immigration attorney to handle your case, your peace of mind and future are worth it!

Obtaining an immigrant visa may be a complicated matter, but The Law Office of Gilda McDowell fights for your right to live and work in the United States.